Over day to Wadi El Natrun 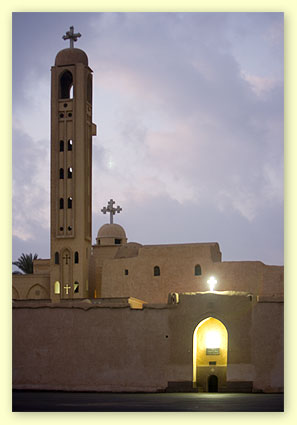 NEW!! Drive by a modern air-conditioned vehicle to Wadi El-Natrun, the actual birthplace for Christian monasticism. Basically, there were about 50 monasteries, only 4 have survived into modern times. Begin your trip with Deir al-Baramus which is the oldest of the surviving 4 monasteries, and in many ways the most isolated, then proceeds to Deir Anba Bishoi whose body is still in the monastery. Continue your trip to Deir Abu Maqar which is the richest monastery now in Wadi El-Natrun, as it has more than 100 monks and 600 workers in the extensive farm which spreads in front of it. You will end your trip with Deir El-Suryani which is the smallest and most compact of the 4 monasteries. Upon return to alexandria, You will get to make a photo stop for Alexandria Library , Qaitbay Citadel

More Information : Trip type By an air-conditioned vehicle
pick up time According to Cruise Liners Schedules, guarantee to return two hours before your departure times

Important note: We have spare (backup) coach available in all our tours so in case of any problem you will get the other coach in one mint

Payment policy: NO DEPOSIT REQUESTED
PAYMENT AT THE END OF THE TOUR AFTER YOU ARE SURE THAT YOU ENJOYED EVERY THING

Entry Visa info: Egyptian entry visa obtainable onboard the cruise before your pick up, that is operating by the Egyptian Immigration association for American, Canadian, Australian, British, German, Italian, French, Swiss, Austrian, Belgium, Dutch, Scandinavians and some other nationalities as well. It would be just stamp put into your passport.

Safety: Egypt is a safe destination. Crime in Egypt nearly does not exist. Security is good and there are specially trained Tourist Police
The buses move in convoys for protection. The Egyptian government take so much care of the tourism as it is the national source of income in Egypt. the tourist in Egyptis VIP person So the Egyptian police (not the ship) provide police cars, security, guards around all the buses This service is not by the ship or Ramses tours its provided for all the tourists that arrive to Egypt, make organized tours

Health Tips By Ramses: The only health hazard that you’re likely to come across is an upset stomach. The best way to avoid this is to make sure that you only drink bottled water, avoid ice and ice-cream and anything that may have been washed in tap water (salad). All fruit should be peeled before consumption. Milk is unpasteruized and should be boiled. Precautions should also be taken against prickly heat and sunstroke”